On August 14 2015, Dr. Eilish Cleary — Chief Medical Officer of Health for NB –responded to some of the points raised in our August 4th Kent County NB Council of Canadians communication to her. In this document, we addressed multiple concerns about the use of glyphosate herbicide sprays on agricultural crops and in our crown forest reserves.

Dr. Cleary concurs that the sprays are probable carcinogens. She has committed that her staff will be doing further research on the level of risk and what steps might need to be taken to protect the public. She expressed that her staff will pay particular attention to the point we raised regarding the high incidence of non-Hodgkins Lymphoma among men in NB, and the finding from the World Health Organization’s IARC panel that this might well be related to the widespread use of these herbicides in our province.  FYI, here is our follow-up letter to Dr. Cleary…

Re: Follow-up on your August 14 2015 communication regarding
Glyphosate-based Herbicides and Health/Environmental Concerns

Dear Dr. Eilish Cleary:
At our September 9 2015 meeting of the Kent County NB Chapter of the Council of
Canadians, we discussed the correspondence we received back from you in response to our 5-page letter (dated August 4) about glyphosate herbicides. I was asked by our
members to share the following with you.

We deeply appreciate that you are going to look into the points we have raised regarding the human and environmental health risks of glyphosate herbicides. We fully understand that it will take some time to conduct this research and then to reach conclusions on what steps the NB Department of Public Health may feel are necessary to protect the public.

In the interim period, however, our members and other residents of Kent County
communities, as well as other New Brunswick residents, are potentially put at risk. This is especially true for those who live and/or work near areas that get sprayed. Examples that have been mentioned to us include: men cutting wood and seeing the lot
next to them get sprayed, with no warning; a farmer’s field where the crop was sprayed to dry it up, and seeing flock after flock of migrating geese land in this field to eat the grain; forest areas with many berries is sprayed, but people still go to the woods to pick berries and such right after the spray, – this occurs before the die-off begins, so they do not know see the warning evidence that the area has already been sprayed.

Compliance is another concern. Someone mentioned that a field near her home was
sprayed and she was concerned so she checked the regulations. The spraying was too
close to residences and also to a watercourse. This raises the issue of how one assesses dangers or risks: by what is supposed to be done, or what is actually done?
In addition there is a general feeling that the “warning” signs that are posted are too small and often not located in a publicly visible area. The purpose of these signs is to alert the public that this spray is on the ground and people should use deep precautions.

As well, some new information has become available about these chemicals during the
past six weeks.

Our members feel strongly that, based on what is already known, in the interim you could recommend better, larger, more visible posting of warning signs both for forestry and for agricultural uses. As well, advance notice of spraying on hydro lines and in forests should be hung in public locations such as pharmacies, convenience stores, post offices, and other places where there are local bulletin boards. These maps could also be posted online and promoted through social media.

We look forward to seeing your report when it is done. Thanks for taking our concerns
seriously. 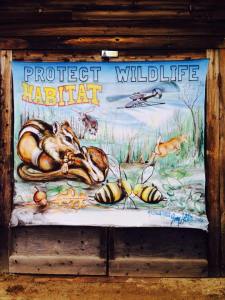